skip to main | skip to sidebar

Today is the first day of our school's three week winter break.  We get the extra time by forgoing holidays throughout the year and by starting earlier, and everybody's happy to be off.  But I can't help but wonder if the weeks off are going to do more harm than good.
When we had a one week break with the calc kids over the Thanksgiving break, they forgot pretty much everything they had learned about the chain rule, and now a lot of them are going to struggle with the rest of the course because of it.  I could tell that it wasn't sinking in quite right when I was teaching it, but I attributed that largely to student absence and refusal to do homework/come for extra help (everyone was busy with college applications).  I thought that they'd study it over break to catch up, but for the most part they didn't.  What do you do to make sure that kids don't lose everything over break?
Posted by David at 3:07 PM 2 comments: Links to this post

How could he pass this up?

This may be the cutest video ever from Damon Weaver, a 5th grader asking Barack Obama for an interview.

Posted by David at 10:22 AM No comments: Links to this post

Re: this post on Eduwonk, I thought I'd put in my two-cents about TfA. I have met a few TfA teachers in my time, and they have all been intelligent, hard-working and dedicated teachers. While I don't have my hands on objective longitudinal data like CALDER, my experience has been that TfA first-year teachers are just as good as other non-TfA first-year teachers. The Mathematica study, one of the few studies with random assignment done on ed reforms, confirms this observation. I don't think that a convincing argument can be made that, in general, TfA teachers are doing educational harm to their students.

The argument that TfA teachers are detrimental to their schools or are a bad investment for principals is understandable, given that many TfA teachers leave after 2 years. I would be interested to see the rate at which non-TfA teachers leave the same schools that TfA teachers work at. I would be even more interested to see the attrition rate of teachers that are at least as effective as TfA teachers at those schools. My guess is that good teachers in difficult urban schools tend to leave teaching after a short period of time, perhaps to become administrators or to pursue other careers that are more lucrative and less stressful.

Ultimately, TfA's biggest contributions to the education enterprise are in teacher recuitment and selection. TfA has effectively mobilized advertizing and recruiters to transform urban teaching into a highly desirable, highly competitive career. If urban districts around the country were able to convince cream-of-the-crop college graduates to line up around the block to become teachers like TfA, our schools would provide our children with far superior educations.
Posted by David at 8:30 AM 2 comments: Links to this post

Rigor is a challenge

I have the great fortune of working with a smart and dedicated department chair who is also teaching Math B, and we have worked through a number of challenges so far this year. Aside from my learning of the proverbial ropes as a new teacher, we have dealt with the absence of foundational skills (1 - 5 = 4), mass rebellion of students (this is too hard!/you're a bad teacher), high failure rates (50%), excessive absences (about half had over 10% absence, with many much higher) and a curriculum overfull of challenging content. Last year's Math B teacher dealt with this by lowering standards and providing easy ways for students to pass. Last year's Math B teacher only had 3 of 75 pass the Regents.

Our principal has held the line on increasing rigor in our school across the board and we're seeing the results. Students are failing in massive numbers. To hear other teachers talk about it, the students were failing in massive numbers before as well, but teachers and administrators were able to massage the numbers in order to get students to pass. I'm happy that our administration is no longer expecting us to do that, but now a whole bunch of my students are not going to be graduating on time. That feels pretty bad.

Ultimately it would be a disservice to my students to hold them to low standards, but the process is painful for all involved. The principal has arranged a meeting with us, the guidance office and the failing students to explain the consequences of their failure with a more serious tone in the hopes that they'll shape up before the end of the semester. But this is just gauze on a gushing wound.

I love calculus, with all of its rules and formulas, not just for its own sake but also because it's useful in real life. However, there are some elements of the AP Calculus curriculum that I find unnecessary. For example, last week I was teaching my calc students how to find derivatives of inverse trig functions (arcsin, arctan, etc.) and I had a hard time pretending to be enthusiastic about them. Why memorize derivatives of functions that you can just find in a table in the back of a book, and that have no use in real life?

Well, a teacher of mine gave me this problem as an example of a real life application of these derivatives, and I think it's pretty neat. Can you solve it?

Miguel and his friends went to go see "Quantum of Solace" in a movie theater, and they wanted to get the best possible seats. The screen was 8 feet high, and the bottom edge of the screen was 5 feet above their heads. How far back should Miguel sit with his friends if he wants to have the best view of the screen? Assume that the theater doesn't have stadium seating, and that the floor is flat all the way back. Also assume that there are no other tall people there to block the view. 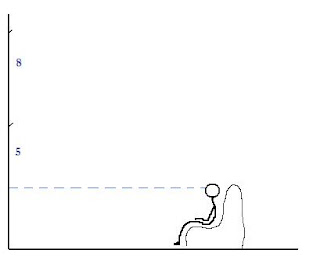 (Hint: To find the "best" view, Miguel wants to maximize the viewing angle)
Posted by David at 3:09 PM 4 comments: Links to this post

So after months of reading and appreciating other teacher blogs and blogs about education, I thought I'd make my own. This blog will be about my first year as a high school math teacher at a charter school in NYC. I started working at my school in April, and this year I'm teaching Math B and AP Calculus AB. I'll also post interesting math problems and education policy news that I come across, and maybe a picture or two. I'm hoping to connect with other education-o-philes and math nerds about the challenges and triumphs of teaching math (and teaching in general). I also just enjoy writing, and figured a blog would motivate me to do it more often. Hopefully you'll find something interesting here. Enjoy!
Posted by David at 2:10 PM No comments: Links to this post